Ushering in the future of food isn't easy. Learn how MyForest Foods supports an amazing team of experts from a broad range of disciplines.
Try Haystack With Your Team 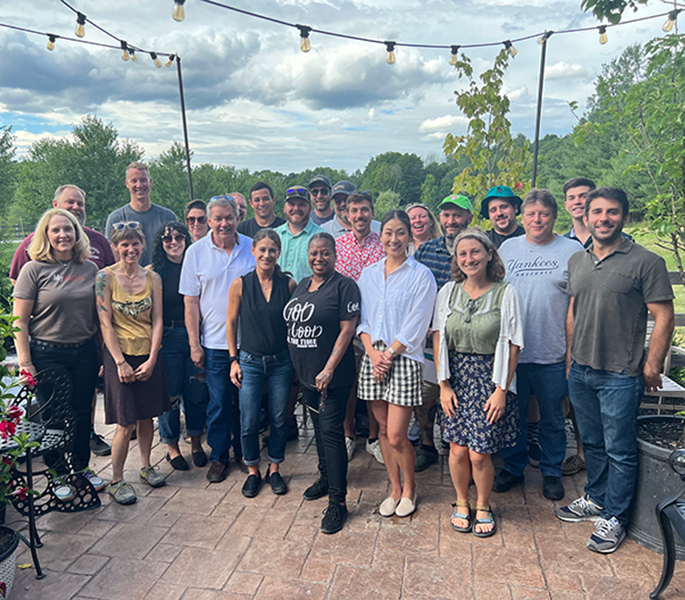 MyForest Foods is ushering in the future of food, daily.

Many plant-based meat alternatives are made with pea or soy protein, bound together with other various ingredients. MyForest Foods’ flagship product, MyBacon, is created from whole cuts of mycelium (the root-like structure of mushrooms), grown inside their one-of-a-kind vertical farm!

As you might imagine, developing a groundbreaking product like MyBacon wasn’t easy. In order to achieve such a complex and challenging objective, MyForest Foods needed to build an amazing team of people with all types of backgrounds, from engineering to agriculture, culinary, science, and storytelling just to name a few.

We caught up with Ben Hall, Digital Experience Director at MyForest Foods to learn what drew such a diverse collective of innovators to the team, and how they’re using new tools and techniques to usher in the future of work alongside the future of food.

“It’s a group of really good people who are super passionate and dedicated to the cause,” Hall said. “Everyone understands the level of commitment it takes to accomplish what we’re trying to do.”

When asked what it takes to build a team like that, Hall shared some great advice:

“Start with a great people ops team. But just as much, it’s what you’re working on. This sort of mission-based work draws in a diverse range of creative, curious people who are passionate about ensuring current and future generations have a more sustainable way of life, and a healthier planet to call home.

For example, I used to work in outdoor recreation. I believed that by introducing people to nature it would help them build a better relationship with it and understand why it’s so important to protect. And it did! The problem is, not everybody has access to the outdoors; not everyone can get out and play. But everyone has to eat. I realized this was a way for me to commit myself to protecting this environment we call home for generations to come.

Some of us are engineers, looking at solving really complex problems, and trying to reach a similar goal. Some of us are culinary experts who joined to create delicious but sustainable meals. And some of us are environmental warriors just looking to make a difference through food.

It’s all rooted in a passion for making the world a better place—not just for ourselves, but for everybody, and for the future.”

It’s all rooted in a passion for making the world a better place—not just for ourselves, but for everybody, and for the future.

With such a diverse range of people from different backgrounds and disciplines working together toward a common goal, it was important for the MyForest Foods team to have a reliable way to communicate, connect, and share knowledge.

The team at MyForest Foods was looking for a hub: a single place where any member of the team could go to access all the things they need to do their best work no matter where it was stored, or what time of day or week it was.

“We have a disparate set of file sharing systems that different people need access to for different reasons,” Hall explained. “When I first joined, it was really hard to know where to go to find information in these systems. We were looking for a system that could help with that.”

After much consideration, the team chose Haystack, and named their installation “MyNet,” a clever combination of the network of people it connects and the weblike structure of mycelium.

While instant access to a central source of information is a major benefit to any team, Hall shared that there was another less expected but equally powerful benefit:

“Haystack was able to help us solve for ‘who do I talk to’ just as much as ‘where do I go?’ It gave us that hub-and-spoke solution, but also the capability of attaching the personal side: who people are outside of work, what they do, etc.

That’s been a major benefit for us, but we’ve only scratched the surface. As we continue to grow, bringing dozens and dozens of people into a production facility, that’s where MyNet will really shine as that hub—not just supporting day-to-day work and operations, but also the people doing that work, and their interactions with one another.”

Haystack was able to help us solve for "who do I talk to" just as much as "where do I go?"

Like many modern organizations, MyForest Foods uses a diverse mix of communication channels, from email to Slack, text, and more. The team adopted MyNet as a way to bring all those mediums together, but it took on its own role as a cohesive way of sharing more complex or dynamic information.

“MyNet is also becoming like an internal blog. It’s a great place for us to highlight things like launching new retailers—the locations, the photos of the store, our product on their shelves—all the information that you really can’t share in a pleasant and dynamic way with email, and you really can’t do on Slack very well.

Being able to reach people on those other platforms, but then pull it all into a dynamic environment changes the game completely for us.

We also welcome our new team members in a post when they join. It gets distributed similarly across all those different channels, and it’s generated more traction than the company-wide emails we traditionally sent when people started with us.

Being able to tag that person in the communication—where people can follow their profile and learn all about them right away—it connects all the dots more fluently for us.

MyNet is quickly becoming our channel of choice for that sort of communication, then we’ll ping people on Slack when there’s something new on MyNet.”

Being able to reach people on those other platforms, but then pull it all into a dynamic environment changes the game completely for us.

The MyForest Foods team’s engagement with MyNet has been exceptional, and as Hall pointed out, there are many factors that play into its success.

“It’s on us to make the content as engaging as possible, so employees look forward to logging in, and want to see things like:

Finding a diverse range of champions is a key ingredient in developing that engaging content—but also making sure it’s not a burden for them to produce it.

“From the beginning I was really keen on developing champions from various departments so there are multiple voices being heard.

I’ve used other intranets before (no need to name names), where I found the complexity was such a deterrent to engagement. The worst thing for engagement is to log in and have a platform that’s just talking at you from the top-down, rather than something you’re actively participating in.

I believe MyNet can truly be that hub that everyone can go into and take part in conversations and company wide content.”

From the beginning I was really keen on developing champions from various departments so there are multiple voices being heard.

Looking Forward to the Future

With such a future-focused team working seamlessly together, it only made sense to ask what Hall and his colleagues had planned for MyNet, and some ideas on the horizon:

“I want the natural cadence for everyone on the team, whether they’re working remotely, in-office, or on the production floor, to be able to open up the browser (or mobile app), and head to MyNet.

I’m also looking forward to seeing the evolution of integrations—things like really tight LMS integrations, where someone could take a class in MyNet, and it would register on the LMS platform.”

As our chat came to a close, Hall offered a few pieces of advice for new Haystack admins, working to build a thriving community like the one at MyNet.

‍Don’t force it; make it fun. Anything people are forced into, they’ll typically bristle at. You don’t want your intranet to be one more job or task people have to do throughout the day—they have enough to do already.

Little things like the name game can be surprisingly popular.

‍Choose the right champions. If you ask someone to be champion and they’re apprehensive, find someone else. Offer to help them every step of the way, but if there’s someone else on their team they think might be a better champion, work with that person. The best champion for a department isn’t always just the most senior member—it could be someone who reports to them.

Look for someone who’s maybe a little more extroverted to begin with, who can add engaging content that breaks the monotony of the workday instead of adding to it. You need your champion’s buy-in, or you’ll always find yourself checking in, asking them to participate, or doing it yourself.

Ready to get started?